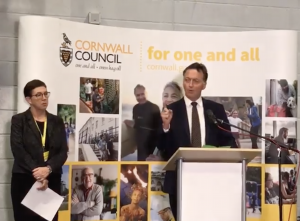 Once again the Conservative is swept in on a national tidal wave, while we are swept aside! Nonetheless, congratulations to Mr Thomas on his victory.

A positive campaign – to build a brighter future

We fought a positive campaign – for our children’s future. For an outward-looking, forward-looking and compassionate country. To heal the divisions, to bring our communities together and to build a brighter future.

But electors chose a Party which will take us on a different path. Many lent their votes to the Conservatives this time because they believed they would get the B word done and that that was apparently their primary concern. Whether it gets anything done or merely starts fresh chaos remains to be seen.

I fear for the future of our country. I fear for the future of our NHS, our climate, our schools, about housing inequality and widening inequality in our society. I also fear we’ll be witnessing more Green-washing, charity-washing, photo opportunities and public relations stunts as responses to these issues, rather than the substantial change in policy which our country needs. And I fear we’ll have more excuses for why the Conservatives cannot deliver their many pre-election bribes and manifesto promises…

It is vital that – in spite of this profoundly depressing setback – we must not abandon the people who need and deserve their voice to be heard and who will otherwise be ignored, or simply used for public relations stunts.

I was again inspired by the people I met on the campaign trail. West Cornwall and Scilly has a wealth of remarkable, perceptive and considerate people who get it. And I was energised each day by an outstanding team of volunteers who came together from this community to help me fight this campaign. The commitment and support was remarkable. People of no Party affiliation and many of other Party affiliation. They all recognised how important this election was. They knew as did I that this was about more than merely getting a B word done. We will not let the energy and dynamism of this dissipate.

I thank our team led by our agent, Liz Wilkin. A remarkable effort and a magnificent campaign.

However we were ultimately undone by forces beyond our control; by actions and decisions which ultimately undermined the effort we made to win this seat.

Why did we lose?

It is because many of our supporters (and many former Labour supporters as well!) were distracted/misled by the Tory propaganda. They believed it was just a “Get Brexit done” election. Too many seemed unaware it was about the whole of our Government for a full 5 year period!

The unvarnished truth however is that our Party leadership made three critical tactical errors – each one of which I attempted to persuade them not to do. These comments are directed at the group who surround (advise and protect) the Leader and are not personalised at Jo Swinson herself.

The first was that it chose to adopt a deeply unwise policy position – Revoke Article 50 – which I warned would drive our supporters away. See my (hastily thrown together!) speech to the Party Conference in September.

I warned that the “Cummings’ Government” would make sure the Liberal Democrats are viewed as illiberal and undemocratic. I warned that this policy declaration would prove to be counterproductive, because it would result in us losing in seats like this; granting victory to the Brexiteers. I’m not claiming to have remarkable foresight, yet what I predicted is what happened. And it is of course the opposite of what the policy was intended to achieve.

It followed a succession of what I saw as unappealing campaign slogans – “Exit from B…”; Boll**ks to B…”; “Stop B…”- all of which shouted into a diminishing evangelical end of the remain echo chamber and alienated most others.

Second, our Leadership had a golden opportunity to explore the possibility of a temporary alternative “Caretaker Government” during the Autumn. It refused. This was a tactical mistake. Based on the belief that the risk of being associated with and therefore toxified by Jeremy Corbyn was greater than the potential benefit of being able to wrest the control of Brexit away from the dangerously dishonest PM Johnson. It is very doubtful that Mr Corbyn would have ended up as PM in those circumstances, but our Leadership was unprepared to risk that possibility. I argued that this placed narrow and self-defeating tribalism above the national interest.

Third, it made the suicidal call to have an election now, just when the whole agenda was evidently heavily tipping in favour of the Tories. I appreciate that others closer to the Westminster village were convinced that Johnson would have pulled the plug anyway (using a one line Bill), but that was not evident and the Parliamentary arithmetic didn’t appear to add up for him. It couldn’t have been a worse time for the ‘Remain’ camp. We could have chosen better times to precipitate the election, especially if the Caretaker government could have been assembled, as mentioned above.

In my view, that’s why we are suffering this result. It’s depressing. But our Party Leadership must accept some (though not all) of the blame for this. Coupled with a Momentum-led Labour Party campaign which appealed to the few, not the many, the scene was perfectly set for Dominic Cummings to clean-up. And so he did.

Our campaign fostered hope. But now it’s clear many vulnerable people and groups are exposed to a Government which is not on their side.

We must not walk away. There’s too much at stake.

Tempting as it is we must not recoil away to lick wounds for 4 years while the Conservatives are granted free rein to do as they please. The enthusiasm, energy and courage generated in our local campaign was a very big plus to take away from this otherwise profoundly depressing result. We will dust ourselves off and regroup. I remain undaunted. Our community and our climate deserve a voice.

The campaign goes on…