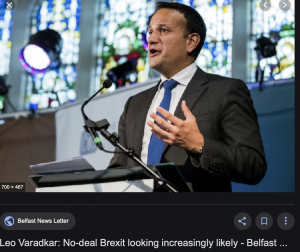 Irish PM Leo Varadkar has made clear to his EU colleagues that it is not worth reopening Brexit negotiations with the UK. He’s right. PM Johnson is merely engaged in synthetic media posturing for his right-wing supporters not in a serious attempt at renegotiation.

Leaders of other countries are laughing behind their hands, while attempting to treat the UK with diplomatic respect. The Irish PM is an intelligent statesman. The UK’s PM is a pampered public school buffoon. It’s embarrassing to see the UK further humiliate itself on the international stage.

There is no chance of any further meaningful negotiation of the existing Withdrawal Agreement. The UK Government won’t accept that. The only other alternative is a ‘No Deal’ Brexit and that won’t happen because Parliament won’t allow it and the Government cannot either morally or constitutionally force it through.

So. We’re not leaving.

We can waste further time while the Tories engage in fatuous posturing until 31st October, and until the inescapable reality hits them. Or the Government can be honest with everyone, and most importantly with itself, and take a different tack. Find a better way of resolving this chaos.

The Conservatives created this preposterous mess and international humiliation. But they’re clearly not capable of resolving it.

There’s no painless way out of their self-inflicted shambles. But responsible politicians must be prepared to find a way forward and to attempt to heal the deep divisions the Tories and their far right friends have created.

To coin a phrase, “No ifs. No buts”. The Conservatives must stand aside now and let others sort out this mess.

Posted in Brexit, Europe, Government, Immigration, In the Media, Political Fight, Uncategorised | Comments Off on “No ifs. No buts”: Brexit won’t happen