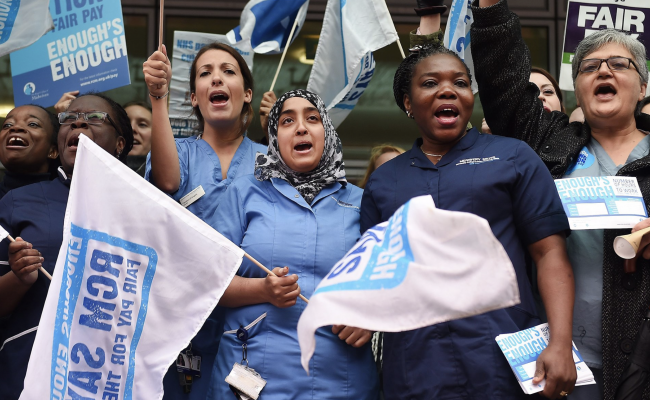 The Royal College of Nursing (RCN) has warned that the fee for using NHS for nurses from outside the European Economic Area will double to £400 from tomorrow (Jan 2019). This will discourage nurse recruitment at exactly the time the NHS needs them most.

RCN acting general secretary Dame Donna Kinnair: ‘These fees can tear families apart.’
Protests from nurses failed to reverse a government decision to double the fee that overseas nurses and their families must pay to access NHS services.

Conservative MPs (including all of Cornwall’s six Tories) voted in favour of increasing the immigration health surcharge, payable by people coming to the UK from countries outside the European Economic Area (EEA).

From 2019, overseas nursing staff will have to pay £400 a year, up from the current fee of £200, for themselves and for each family member – a cost which the RCN said signalled that international nurses were no longer welcome in the UK.

Latest figures show there are just over 70,000 nurses on the Nursing and Midwifery Council register whose initial registration was outside the EEA.

RCN acting general secretary Dame Donna Kinnair said: ‘The very people who deliver healthcare should be the last people to have to pay spiralling extra charges for it.’

She accused the government of creating a hostile environment for nurses from beyond the EEA who come to work in the UK. She added that these staff members already contribute financially through national insurance and taxation.

The Conservatives sought to defend the £400 surcharge, saying it better reflects the estimated £470 a year the NHS spends, on average, treating each of those who are required to pay it.

Immigration minister Caroline Nokes said: ‘We welcome long-term migrants using the NHS, but the health service is a national, not international, health service and we believe it is right that they make a fair contribution to its long-term sustainability.’

But Liberal Democrat national health campaigner, Andrew George, said “The RCN is right. The Conservatives are again creating a “hostile environment” through the back door.

“On the one hand the Conservatives have presided over massive NHS workforce mis-planning, with at least 80,000 unfilled nurse vacancies, but they’ve also cut nurse bursaries and then held the majority of nurses pay below inflation. Coupled with the stress caused by severe understaffing it’s no wonder there’s such an exodus of nurses from the NHS.

“Now they’ve just signalled to the very nurses who could help the UK out of this crisis that they’re not welcome. The Conservatives want to blow an immigration dog-whistle to the right wing media whilst draping themselves in the insincere image of devotion to the NHS.”

Although the fee rise has been supported in the House of Commons, Professor Kinnair said the RCN would be lobbying peers in the House of Lords to ‘send a message to the government that this morally bankrupt decision is completely unacceptable’.