Cornwall should welcome NHS announcement – even if it’s from Johnson’s magic money-lending tree! 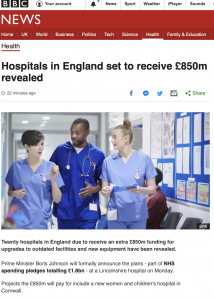 The Johnson Government is making an extra £850 million available for future capital spending on NHS hospitals. This includes nearly £100 million for the long awaited and long promised rebuilding of the seriously deficient Princess Alexandra Maternity wing at Treliske, Truro.

Facilities in the wing have become inadequate. Midwives have and are still having to manage the second and third stages of labour in first stage rooms. This is scandalous. Plans for the replacement were drawn up years ago. It’s doubly scandalous that the Trust’s hard working and dedicated staff have had to cope with this for so long.

Of course even this renounced recycled old money for the NHS is welcome and an improved maternity facility is good news for the area. But this is mostly aimed at marginal seats prior to a much anticipated General Election. Defending Tory marginal seats is clearly not a priority when there is a 100,000 shortage of doctors and nurses across the NHS.  Indeed, these same local Tory MPs have consistently voted to create this problem in the first place by supporting policies to scrap nurse training bursaries which has created a massive dent in registered nurse and midwifery recruitment. But announcements about recruitment of staff cannot be so easily associated with good news stories in areas where the Conservatives are most concerned about losing seats.

We’ll be fascinated to find out how he will fund these commitments, where the lending will come from and when the projects will actually be built. Even though the announcement has more to do with Johnson’s desperation to hold on to power than his commitment to the NHS, we are obliged to welcome this. It’s already clear this isn’t new money, but recycled old money.